How Does A Digital Thermometer Work?

How Does A Digital Thermometer Work?

How Do Digital Thermometers Work?

Thermometers used to be simple.

First, there was a glass tube filled with a liquid that expanded up the tube as the temperature increased. We all understood how that worked. Then came the bi-metal thermometers. They were made from a layered strip of 2 metals with different coefficients of expansion formed into a coil.  When the coil was heated the metal expanded and the coil unwound a small amount. This motion is used to move a needle which points to the temperature. This is a straightforward concept that most people also understand. 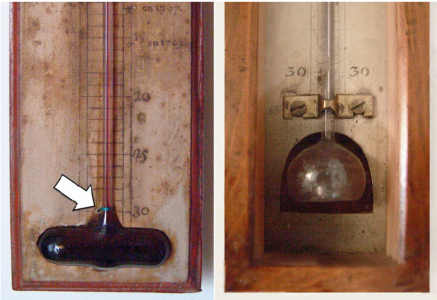 The earliest temperature observations in the world: The Medici Network (1654-1670) – Scientific Figure on ResearchGate.

Today, the best thermometers are digital, both for speed and for accuracy. Yet, most people do not know how a digital thermometer works.

This is a brief overview of how digital thermometers work.

There are 4 popular sensors used today:

These sensors all produce either a voltage, current, or resistance change when there is a change of temperature. These are “analog” signals as opposed to digital signals. (More on this later.)

To understand how the digital thermometer works, you need to know how the sensor works. Without going into great details, each of these sensors has a different analog output.

The thermometer must excite and measure the “signal” from the sensor. Each method is different, but the result is an electrical signal that is proportional to temperature.

A digital solid state thermometer provides an excitation current to the sensor and measures the linear (mV/°) signal from the sensor.

Now we have the thermometer conditioning the sensor and making an electrical measurement of its output. This signal, voltage or resistance, is the analog signal. In the thermometer this signal goes to an A to D converter (Analog to Digital). The A to D converts the analog signal into a series of pulses (digital signal). Now the signal is in the digital world. Once in the digital world, the signal is matched against the resistance curves of the sensor, CJC added for a thermocouple and the digital signal is sent to a display drive that converts  the temperature signal into a signal to turn on certain segments of the display so that you, the human, can “read” actual temperature determined.

You now have an overview of all the signal processing that goes on inside a digital thermometer. Understanding how the sensor and the thermometer interact should help you apply the sensors properly and make the best possible measurements.

Resources from TEGAM for Digital Thermometers

Please Contact TEGAM with questions or queries or to schedule a free demo of our digital hermometers.

View all posts by: Snowy DeCaen